In 1873, two women were found brutally murdered on a small island off the New Hampshire coast. A third woman survived the attack, hiding in a sea cave until dawn.

More than a century later, a photographer, Jean, comes to the island to shoot a photo-essay about the unsolved crime. She becomes obsessed with accounts of the dead women's lives in this barren fishing town: the long stretches of loneliness, the relentless winds that threaten both people and their property. Is marital misery connected to the killings?

Jean's marriage is enduring heavy weather of its own. On the boat she has chartered for this project, she and her husband are growing more distant from each other. Their nights are full of drink and terrible silences, and Jean feels jealousy and distrust invading her life and her work. The forces that blasted the island a century earlier come alive inside Jean, bringing her to the verge of actions she never dreamed herself capable of -- with no idea whether her choices will destroy all she has ever valued or bring her safely home.

Exquisitely written and powerfully moving, The Weight of Water forges two unforgettable stories into a single breathtaking narrative. Exploring trust and betrayal, the destructiveness of passion, the deep-woven bond of family, and the endless resonance of guilt, this is an overwhelming journey through the farthest extremes of emotion.

Shreve learned about the Smuttynose murders in 1973, while on a sailing trip with her family. During this trip, she visited the Isles of Shoals, a small group of islands off the coast of New Hampshire. Shreve was struck by the islands' beauty and intrigued by the enduring power of the lore and legend surrounding the century-old crime. Soon, Shreve began writing about the murders -- as fiction. In 1975 "Silence at Smuttynose," Shreve's story based loosely on the murders, was published in Cimarron Review. Twenty years (and four novels) later, Shreve again reread "Silence at Smuttynose" and realized she wasn't quite finished with the story. She resumed her research on the case, studying the transcript of the trial to find out the facts as they were recorded.

In creating The Weight of Water, Shreve carefully wove the historical story with the fictional one, though, she maintains "the heart of the book has almost nothing to do with the facts." Rather, she used the historical record as a springboard for a larger story that explores the consequences of pushing a woman to the edge. Shreve says she was not the first to question the outcome of the murder trial, but she found it "a very hard book to write" because ultimately she intended for the reader to have sympathy for the women of Smuttynose.

Debate about the identity of the Smuttynose murderer continues to this day, rekindled by the publication of The Weight of Water. "The facts are out there for speculation," Shreve says, "The book is something separate from that debate."

For more information on the Smuttynose murders, please visit the SeacoastNH website

“Both stories move slowly and surely through the dark and distorting medium of water toward tragedy….Both stories feel primitive in their passions, as if the characters were bereft of language and necessarily reliant on gaze, gesture, and touch….This is a powerful achievment.”
—Barbara Fisher, Boston Globe

“Mesmerizing… quietly spellbinding….A kind of mystery forged of romance and danger….Part of the book’s power is of the conventional whodunit variety….Equally strong is Shreve’s evocative prose style….The Weight of Water is well-crafted entertainment that also plumbs the depths.”
—Dan Cryer, Newsday

“Spellbinding….Shreve’s triumph here is in creating a pace that brilliantly mimics the frenzy of one who acts in a moment of searing passion.”
—Leah Odze Epstein, Nashville Bookpage

“It’s impossible not to keep turning the pages, as Shreve, with somber voice, leads us on.”
—Susan Dooley, Washington Post Book World

“Powerful….This taut thriller is based on the true story of the murder of two women on a small island off the coast of New Hampshire in 1873….Shreve has fashioned together two memorable dramas into a single narrative that explores jealousy, trust, and betrayal.”
—Barbara James Thomson, St. Louis Post Dispatch

“Spare, tightly plotted, and compactly written . . . a novel powerfully driven by plot and language….Shreve displays an intriguing range of style and tone. It is as if an Ibsen drama had erupted in an Ann Beattie novel.”
—Maureen McLane, Chicago Tribune

“Absorbing and suspenseful….The writing is controlled and evocative, the novel mysterious and disturbing.”
—Orlando Sentinel

“Gripping….The speed with which lives unravel is at the heart of both strands of Shreve’s stunning tale. There is plenty for the reader to ponder and savor in this accomplished inquiry into the ravages of love.”
—N. Heller McAlpin, Los Angeles Times

“Enthralling….The Weight of Water sheds light as raw as that which floods the Isles of Shoals in the dark of winter….Shreve has written the most moving book of her career so far.”
—Rebecca Radner, San Francisco Chronicle

I have to let this story go. It is with me all the time now, a terrible weight.

I sit in the harbor and look across to Smuttynose. A pink light, a stain, makes its way across the island. I cut the engine of the small boat I have rented and put my fingers into the water, letting the shock of the cold swallow my hand. I move my hand through the seawater, and think how the ocean, this harbor, is a repository of secrets, its own elegy.

I was here before. A year ago. I took photographs of the island, of vegetation that had dug in against the weather: black sedge and bayberry and sheep sorrel and sea blite. The island is not barren, but it is sere and bleak. It is granite, and everywhere there are ragged reefs that cut. To have lived on Smuttynose would have required a particular tenacity, and I imagine the people then as dug in against the elements, their roots set into the cracks of the rocks like the plants that still survive.

The house in which the two women were murdered burned in 1885, but when I was here a year ago, I photographed the footprint of the house, the marked perimeter. I got into a boat and took pictures of the whitened ledges of Smuttynose and the black-backed gulls that swept and rose above the island in search of fish only they could see. When I was here before, there were yellow roses and blackberries.

When I was here before, something awful was being assembled, but I didn’t know it then.

I take my hand from the water and let the drops fall upon the papers in the carton, dampened already at the edges from the slosh. The pink light turns to violet.

Sometimes I think that if it were possible to tell a story often enough to make the hurt ease up, to make the words slide down my arms and away from me like water, I would tell that story a thousand times. 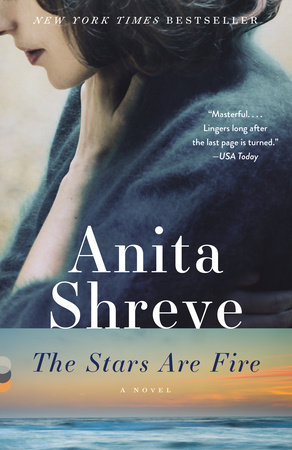 The Stars Are Fire

A compelling tale of edgy, small-town emotions, lingering obsession, and romantic salvation. Andrew, after many years, returns to his hometown to attend his mother's funeral. Planning to remain only a… END_OF_DOCUMENT_TOKEN_TO_BE_REPLACED